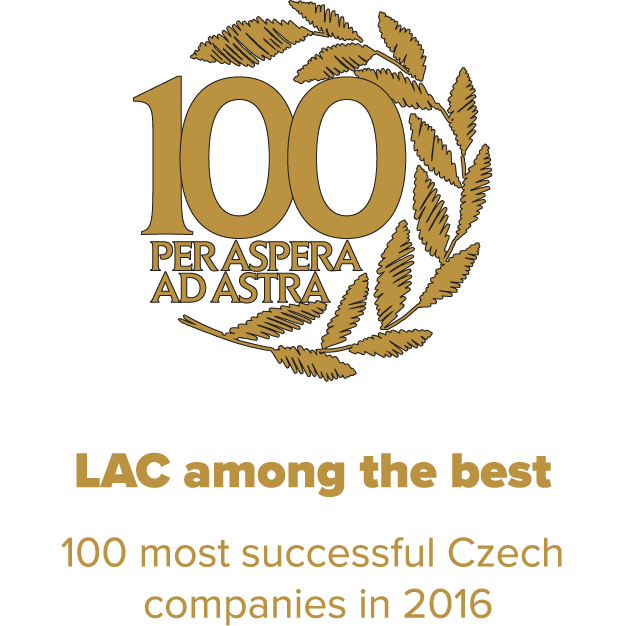 Metallic silver has been used in various forms since the Middle Ages because of its disinfection effects. However, advances in the field of nanotechnology have allowed the revelation of the extraordinary potential and broad spectrum of antimicrobial properties of the finely dispersed silver nanoparticles known also as colloidal silver. The antibacterial properties of silver nanoparticles have been proved to be effective against a wide range of bacteria, including highly resistant strains (such as Staphylococcus aureus). The mechanisms of the effect can include damage and modification of the cytoplasmic membrane of bacteria, damage to bacterial DNA replication, etc. The smaller the nanoparticles, the higher their antibacterial activity. Nanosilver is also highly effective against fungi and mould. It is in many ways even more effective than commercial fungicidal agents. When compared with ionic silver (Ag+), silver nanoparticles (Ag0) are considerably less toxic to human cells. A number of studies have been published recently demonstrating the effectiveness of nanosilver in suppressing a wide range of viral infections, including the flu, herpes simplex, hepatitis B, HIV viruses, respiratory tract infections, rotavirus and coronavirus infections. Nanosilver acts as an antiviral through a number of potential mechanisms, including suppression of the virus replication in human cells. Medicines for the treatment of coronavirus infections (such as Remdesivir), including MERS-Cov and SARS-Cov2, are focused, among others, on the prevention of virus genome replication. Additionally, the survival period of viruses (including SARS) and bacteria on surfaces containing silver or those impregnated with nanosilver is considerably shorter on those surfaces. That is also why colloidal silver offers a huge application potential in medicine, in the antimicrobial treatment of surfaces and in disinfection technologies. Nanosilver is used for disinfection of water and air, as well as areas and products in the fields of medicine, veterinary care, the textile industry and the food processing industry.

What are the differences between colloidal silver and ionic silver?

Colloidal silver can be distinguished from ionic silver very easily – just by looking. While a nanosilver dispersion is yellow to brown (its colour depends on the size of the nanoparticles and their concentration, or on the age of the dispersion), a solution of ionic silver is colourless. The presence of silver ions can be demonstrated in a simple way by adding a small quantity of kitchen salt solution (NaCl), which forms insoluble silver chloride (AgCl) with silver ions. Silver chloride is white and makes the solution milky (see picture). The products produced by electrolysis (using either DC or AC) are usually solutions of silver ions instead of a dispersion of colloidal silver (nanosilver). 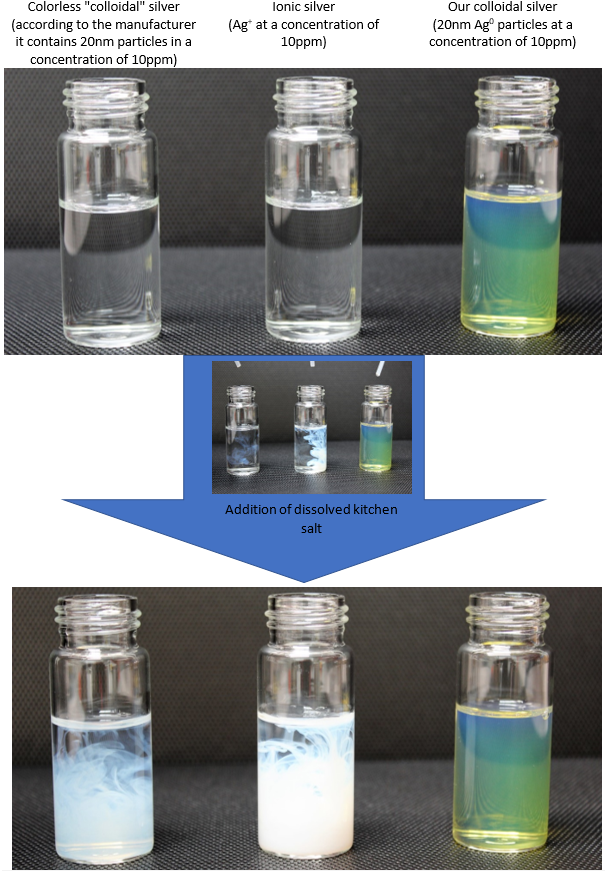 In the picture above, on the left is "colloidal" silver from other manufacturers, commonly available in pharmacies and drugstores, the middle sample is laboratory-prepared ionic silver and on the right is colloidal silver produced by us. The figure shows the common salt test described above, where the silver ions formed a white milky turbidity, while our colloidal silver did not show any discoloration or turbidity.

In the figure can also be seen that the degree of turbidity of the left solution is significantly lower than in the middle sample, from which it can be concluded that the commercially available product contains significantly less silver than declared by the manufacturer.

You can compare electron microscope images below, ionic silver on the left (no nanoparticles are visible) and colloidal silver produced by us on the right (you can see nanoparticles of 20-40 nm). 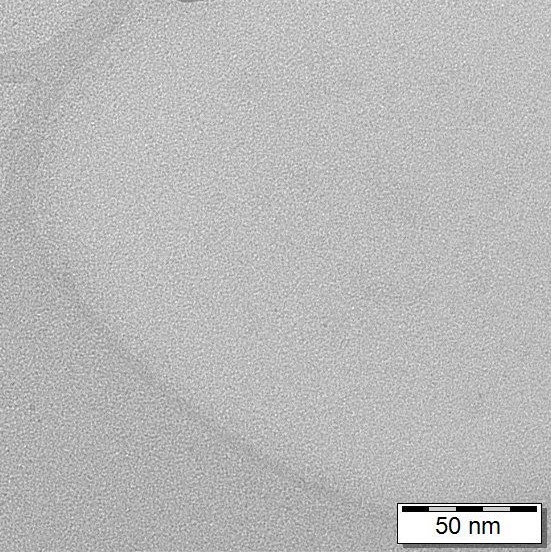 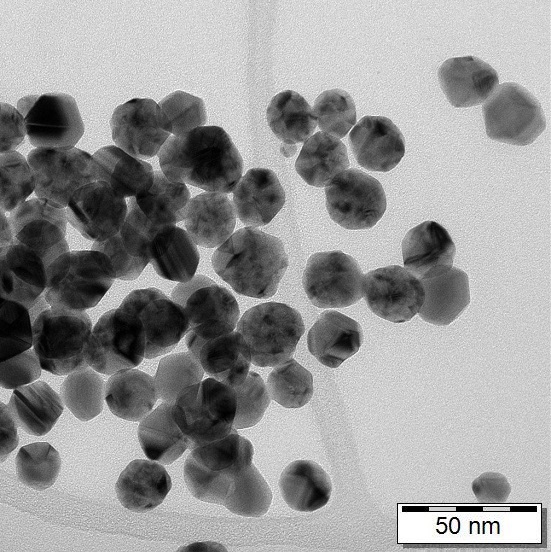 Most manufacturers of nanosilver give the following recommendation: “The product should be stored in dark glass bottles – without access to sunlight and out of the reach of electromagnetic fields (TV, radio, fridge)”. These precautions are unnecessary in the case of colloidal silver as they only apply to ionic solutions.

Unfortunately, most products called “colloidal silver” primarily contain silver in the form of ions. This means true silver solutions rather than colloidal dispersions. It results explicitly from the definition of colloid (colloidal dispersion) that it is a heterogeneous system of ultra-fine metallic particles distributed in the dispersion phase (in a liquid in this case), the properties of which are strongly affected by their huge surface area. On the contrary, ions are defined as atoms with one or more missing or redundant electrons.

Other favourite marketing terms include: mono-atomic silver, silver hydrosol, or silver water. In the vast majority, these terms mean the products containing silver ions rather than nanoparticles. Don’t be fooled by these terms and require a product analysis from your supplier (a picture from an electron microscope which shows nanoparticles; size distribution analysis – e.g. using the DLS (dynamic light scattering) method, etc.). Some manufacturers boast about beautifully sounding methods, but, it is worth making sure such methods really exist. Especially if a colourless product is concerned in which the manufacturer declares the contents of metallic silver nanoparticles with sizes of particles in the order of units up to tens of nanometres and a concentration higher than 1 PPM – such products should not be colourless in our opinion.

What are you looking for?